Playing a “serious” gig on an unfamiliar instrument… insight and connection!

Great weekend – I played a wedding gig at Beaumont Estate in Windsor: and it got me thinking about my style of bass playing, and the way I tend to play at the moment (I’m playing a lot of open mic nights, covers of funk and soul stuff in the main).

The venue itself is pretty grand – you’d think Obama lived there (the bride and groom left via this door, epic wedding photo) – we played the first set during parts of the ceremony in the Hampton Suite (arf arf!) 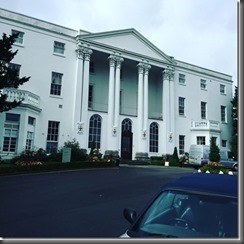 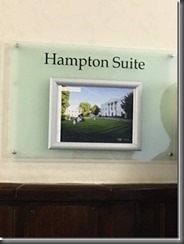 The setlist was in two parts – the second being the reception, your classic wedding gig. But the first half was something else: playing around the actual ceremony – I’ve never done this before. Bird did a great job of pulling rehearsals together, including smaller ones for this “acoustic” set – no drums, but a little percussion. The setlist was a nice little collection of songs to cover the initial wait for the bride, then a song to play as the bride comes in – I had no idea what this would feel like – and a couple more tracks to play while the register was signed and the cake was cut.

So – a great little gig with something completely different!

All the rehearsals were done with the modified Tobias – I used the different modelled basses (P-Bass, in the main) for the soul and funk tracks to give a little authenticity to the sounds. I can’t recommend Roland’s bass modelling enough – it’s supremely tweakable, and the tones really are very good, particularly in a band setting. All this from the same GK-3B pickup which can drive MIDI. Genius stuff! The rehearsals went pretty well – the 4 tracks we were doing for the ceremony part were:

The night before the gig, I was looking at the tracks and wondering – could I play these in a more sympathetic way? The electric bass can be sophisticated, and quiet, but… what about double bass?

I was lucky enough recently to purchase a secondhand NS Design 5-string upright bass – this thing is futuristic, goes down to a low B, and has a switch to move from fingerstyle to bow playing – and it came with a bow! “The bass sounds great”, I thought, “but I’ve only been playing it for 3 weeks… could this work?”

The evening before the gig I tried a few ideas out: the tracks aren’t too tricky – ordinary people has a nice simple structure, I know can’t take my eyes off you really well from previous gigs. After maybe half an hour of practice, “At Last” started to sound the part – that track in particular really benefits from double bass, it makes the track swing and jazzes it up in a way the electric can’t.

But the real revelation was Somewhere Only We Know – I spent half an hour trying to make it work fingerstyle: the original Allen cover doesn’t have any bass on it, so it wasn’t working too well. Then I tried the bow – long bowed notes were a little intrusive, so i wondered about doing a sort of pizzicato bow thing – much beloved of Coldplay (irony!!!)…

It felt good – it put some rhythm back into the track, and made a great counterpoint for one or two longer bowed notes. When Nic got back home in the evening, she said it sounded great, so I decided to give the double bass a try – my first ever gig with a double bass! This is the beast…

Simple controls – volume, tone and the toggle switch to switch the pickups between fingerstyle and bowed use. If you try fingerstyle while it’s in bowed, you get a lot of attack but no sustain – the pickups align their sensitivity somehow, I suspect they may have 2 sets mounted in there at different points on the bridge.

On the day, the guys in the band were blown away by the difference it made to the set – I was really pleased with the result: it felt so much more sophisticated for the happy couple, who, of course looked amazing.

Here’s some more pics of the venue, from the inside: 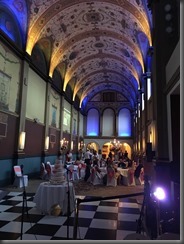 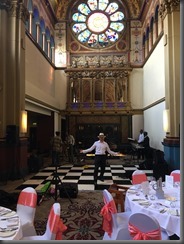 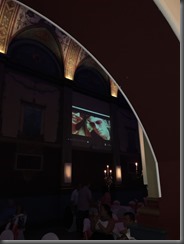 Stretch yourself out there. Comfort zones can be breached – but make sure it’s going to work first!

Posted by Base Experience at 10:43 am