Ski tracks generates some excellent data you can plus straight into google earth. Was just reminded when is started it on the iPhone just now and got this excellent map of the last day's epic trek last march: 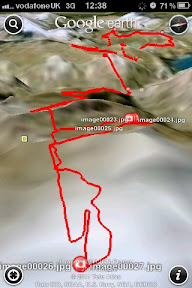 Oo, that's got my appetite up.

Posted by Base Experience at 12:41 pm No comments:

Turning down a gig? Me?

It's true - I got an offer through the excellent Tony of Phat Tone Studios in Reading (his studio's a cracker) of a dep gig in London, expenses paid, hotel, etc. I turned it down after some deliberation.

The bands name is "the Gentlemen of Distorted Sound" (GODS. - look them up on YouTube, they're pretty impressive onstage.

Thing is, this gig was important for them. The chance to support the Quireboys, apparently, rested on it. But their bass player's wife went into labour, so they needed a stand in who could get the songs quick and run with it. I _could_ do that OK.

Thing is, look them up on YouTube, especially live; they're definitely part GnR, part leather-waistcoat-no-shirt-grungeglam. I would simply not fit it, not look right - and these guys have a look as much as a sound and songs.

Simple truth - If I did the gig, they'd sound great, but look hamstrung by the gimp on bass. I can't cause them not to get the gig, it's not fair to them or me. We'd both feel awful.

So I turned it down! Do you think I did the right thing? Let me know with some comments.

Posted by Base Experience at 6:35 pm 2 comments:

I've also been spending time trying to sight read more of jaco pastorious solo pieces, as these may form a great batch of warm-ups instead of using my rather mechanical regime (which I've been using for years).

In amongst all this appreciation for very old stuff, I've got a Moog softsynth for the iPad, which sounds just beautiful! Introductory offer: £0.69. Utter, utter bargain and sounds phenomenal.

My ex-bandmate Terry Collie appears to have had fun last Sunday finding open nights at pubs in London - twickenham / George was apparently very well organised. Rocky styles apparently, but well organised cuts it with me.

Posted by Base Experience at 3:04 pm No comments: