Excellent: just seen a band bow out of the Channel 4 "Mobileact Unsigned" competition on the grounds that it was demeaning: even Alex James couldn't persuade them to poledance for the 4 "lorded" judges (I will admit that Jo Whiley has definitely not done herself any favours being associated with this attempt to create a slightly grungy X-factor - although she tends to be the only dissenting voice sometimes).

I've been in battle fo the band competitions, but never at this level: to be honest, the "stakes" for this comp are much higher - or are they? At least with the last one I was in (with Janeiro) we knew that the eventual prize was to play at FoxFMs party in the park in front of several thousand people: that was definitely an experience. The poor buggers who make it through the Channel 4 skit will be bankrolled by a fat arsehole who I bet won't stump up for a second album.

So kudos to Nemo for turning up and making a stand. The only positive Channel 4 can be assigned in this situation is that they did in fact broadcast the situation. But then chose a lame piss-take about how the van was parked in. The presenter implied they'd parked in such a way they couldn't get out: what if the other cars parked him in, you floppy haired arsewit?

We have to stop reality TV shows. Lazy, cheap, voyeuristic crap. And when they start playing on the dreams of people (X factor is bad enough, but they're mostly starry-eyed McJob cannon fodder - which is cruel) - especially real musicians who play real gigs for real music fans (i.e. people who support local music scenes) - they have crossed a line which makes even my cynical brain-centres hurt.

The hunters in your home... 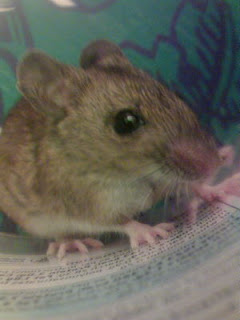 We have 3 young female cats who get antsy when they only get let out in the late afternoon. As a result, they stay out until dusk falls and thus get into "wild cat hunting mode". This seems to have been added to with a "take some work home" mentality where they literally bring live unharmed rodents into the house to chase everywhere.

This poor little bugger is one such rodent.

Posted by Base Experience at 1:20 pm No comments:

Your up-to-date source from Google Trends...

Here's the up-to-date info from Google Trends for those of us waiting for the "house price correction"... bear in mind this is not a totally accurate picture and it does make certain assumptions:

With that in mind, here goes...

2007 only "house price crash" trend - this continues to rise, with a very noticeable "blip" in the recent Northern Rock wake. This one has to be the biggest indicator of what's on people's minds. Self fulfilling prophecy? Well, if the herd mentality holds true, eventually, yes...

2007 only "buy to let" trend - falling? Can it be that either there are enough debt-laden greedy private gits out there now, or is the lure from the TV show is waning as people realise the line of cheap credit is drying up?... I saw a guy in a crap striped suit admit that out of £7.5m of property portfolio he owed about £5m - so he'd be up £2.5m if he sold up now. At which point, the other studio guest said "assuming you could sell it"... and surprise surprise, the "polite strained argument" so prevalent in England today broke out, as our reality-aware bubble-burster was treated to a stonewalling from Mr Pinstripe who couldn't believe things would possibly change...

"Northern Rock" 2007 trend - this one shows the strartling jump in interest in this crappily-planned company at the time of the crisis - but also shows people are still keeping an eye on it...

I've seen some good new stories recently on "shoring up" mortgage markets with banks putting aside crisis funds... holy cow, they'll never be made to pay for their stupidity, will they? :)

BTW, another Windsor jam night wednesday night! Think I might take the 5 string fretless and the combo... not sure where to park for that though!

I got to that Jam night in Windsor - it's the Havana club in Windsor: a stone's throw from the station (actually, it's underneath it, in a very cool arch-basement-long-thin style).

Great night: the guys there have a PA which pretty much does the trick, but the Carlsboro bass head and a wedge monitor definitely don't cut it. I'd consider taking the combo if I wasn't about to sell it! It's always a bit of a lottery taking good gear to a jam night - you can end up with it totally fried (it's happened to me before) by people who don't understand how amps work.

Thing is though, my sound really sucked! The moment I started tweaking the warwick I knew I'd have to use more midrange honk because the Carlsboro simply didn't have the welly. While that might work in some places, I don't like bass with less BASS.

I used to have a carlsboro Cobra 90 bass combo: first proper amp I had. Got a lot of mileage out of it too, but I don't hanker after one of them again!

So on balance, I think I'll bring the combo next week. Hopefully I can park close enough by. I'll take the pod as well.

The guys there are cool - the dude playing percussion's a pretty good drummer: Nick, the guitar player, was very kind about my playing on the night. It's been a long time since I jammed with musicians I don't know... bit rusty, but otherwise OK!

----- Today's Practise Diary -----
Some sight reading: a few more bars of Chromatic Fantasy!
Posted by Base Experience at 6:35 pm No comments:

Well, I'm hoping it is. It seems to be a fact that musicians have to keep looking for bands to join, more than anything I suppose it's probably a function of not finding yourself in a stable act which is the main source of income for all involved. Therefore, you all don't have day jobs, and you're probably young enough not to have too much to lose. I've got the creeping realisation that I'm going to die a bit before I reach forty as my goals and ideals don't match the life I've fallen into.

This won't be anything apart from a resignation that dreams are dreams, and a hardening of the person to what life really is. Starting to realise that the best part really was good, and it was 10 years ago.

This has to change. I'm probably going to have to do something radical. nic feels it too, she's had enough of the emptiness, the vapid manic crap we put up with.

I'm not sure what to do. I could just keep sleepwalking, I suppose.

Maybe tonight will spark me up.

Posted by Base Experience at 9:53 am No comments:

...or, How I learned to let go of the past. Or at least started to.

Maybe it's just the feeling of passing of seasons, maybe it was the huge lucid dream I had last night about being in St Andrews again (which I didn't want to end), but I've been thinking about friendship entropy and loneliness.

Right now there are probably a fair number of people I remember from St Andrews days, scattered everywhere from the US to Shetland to Switzerland to London. All have their own lives (the ones in london seem more successful in keeping together), and a lot use stuff like Facebook.

But it's not the same. The best part of my life was with these people, and telling each other every other month by email that "we must get together sometime" is pretty lame after the first few years.

With that in mind, I guess I'm saying "you can never go home again", which is sad, because that means the place I felt happiest, safe, useful... Is in the past.

I see now that I have to give in to friendship entropy. It's time to stop trying to stay in touch with people who simply have their own lives to lead. i guess i should go get one now, even if it is a tiny, small, rather grey one.

i'm not stopping this blog though: this falls under the heading of self-publishing. I'm just going to stop trying to keep the past alive. I wonder if I've done this before?

Posted by Base Experience at 12:59 pm No comments:

I promise I didn't watch the race.

Well, it sounds like I missed an "eventful" race. The FIA messed up telling people what tyres to use (or so it seems - perhaps ferrari thought there was advantage to be gained in "getting the email late"?) - how hard is it to tell them all at once? Another classic cock-up...

The rain fell in Japan for the F1 weekend, and surprise surprise it was like the M4 on a wet commuting afternoon - chaos. And - double surprise - the pole position man won! Well duh, I may not have seen the start but I bet he was one of the few who didn't get pranged in the first corner or so...

Really. I think it's time for F1 to stick its tail between its legs and slink away for 2007.
Posted by Base Experience at 11:58 am No comments: