The Riviera comes to Slough

So I’ll be the one setting up outside to record some new ideas :)

In the meantime, and it’s at least musically related – check this youtube vid out. It’s the best parody of Kiss I’ve ever seen. 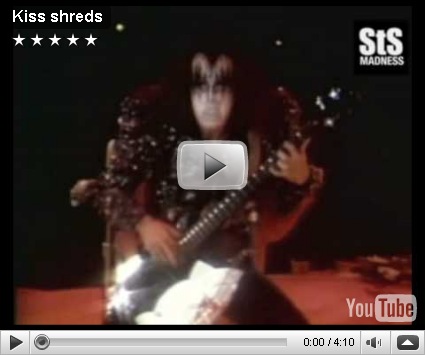 I almost fell off my chair, it’s that funny!

Posted by Base Experience at 12:03 pm No comments:

The Night after the Night After

Good gig, that. Bracknell has a very well hidden basement venue in an arts centre we played in last night, alongside the first gig by some rather talented guys called The Stellar Thieves – great energy live and – thankfully – their music sounds great in a night where we’re playing as well. We found someone to gig with! So nice to have a friend…

Posted by Base Experience at 11:44 pm No comments:

We’ve got another gig at the Cellar place in Bracknell – weird venue, and last time we had a very odd band playing after (the guy before was wicked, solo acoustic) – thrash punk. Good drummer though.

If you come along, bring earplugs just in case!!! I’ll be bringing the stack so the bass will def be up there :)

Big shout to Paul Harckham, hope your Gorillapod arrives shortly mate – one tip, use one of the newer SD card or hard drive camcorders, I was using a MiniDV cam and the tape mechanism got well upset by the vibrations at points :)

Hope to see you in Bracknell on Tuesday night.

Posted by Base Experience at 3:22 pm No comments:

When Digiboxes tell the truth

You have to laugh. Nic and I often have a giggle at what the program guides throw up on the Sky box – and we’ve got a Bush terrestrial digital box which gives some great comedy: 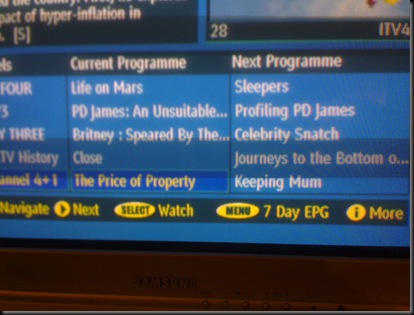 Poor old Britney. Even the digibox is out to smear her personality.

Posted by Base Experience at 12:17 pm No comments:

Last night, great gig. We definitely still need more material but last night was the first live outing of the new track we worked on based on the heavy vibe from a synth line I pulled on the 6-string: the track flowed pretty well last night, but it needs some sax and vox in the bridge before the chorus I reckon. Otherwise it sounds great!

I did get a bum steer from a clamper last night though – you can park round the back of this particular venue, and we did get a message from the bar owners saying that if we had a sign in the window saying we were playing in Heroes we’d be OK, but I saw the clampers freeing a poor git when I arrived, so I asked one of them what the deal was: “you can’t park here mate” got I. So I used the multi storey opposite and got all my gear down 2 sets of stairs (lifts out of order, of course) – 6-string, gear bag, pod and CCL combo – and trundled it (thankfully I didn’t bring the Monster Stack with me, god, I’d have killed meself) through maidenhead to the venue.

Good stage area – backlit with odd LED panels, cycling through colours – and some decent overhead lights. Definitely not your average pub gig. Mind you, it’s more of a trendy bar in the bit of Maidenhead with block paving and the cinema. It’s a little like Dundee – except Dundee has gentrified more of itself in the city centre.

Posted by Base Experience at 11:57 am No comments: