The power of the web

Wow. Just got an email from the guitarist, he's already mixed down a live recording of our new track (and his studio has a bloody excellent live sound) and he's sent us out download links already.

How different is that to when I started, swapping tapes of rehersals. He's done a pro sounding recording already!

I love tech when it's useful, truly useful. That's why I'm not using windows any more. It's useful alright, but it's gone too far and has become a bewildering array of features accessible from a thousand areas (usually unintuitive ones). Top that off with vulnerability and instability and I'm finally off to unix land (prob osx).

Weird. No more windows, apart from supporting the ones left in the house.

His studio is osx now as well!


- Posted on the move

Posted by Base Experience at 4:06 pm No comments:

Some similarities but mostly damn odd. 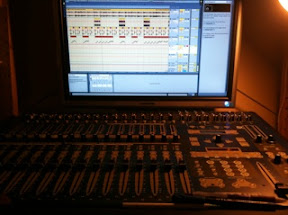 Looks the part though.

Posted by Base Experience at 11:41 pm No comments: 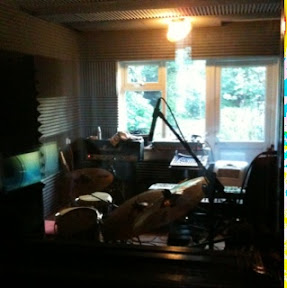 Note 1; Get here on time. My bad, but Burnham and it's fantastic random a4 backup mechanism at j7 did
NOT help.

Note 2; soundproof my own studio. Since tony did his the recordings in they are just spectacular. He can seriously just stick a couple of mics in for ambience and get something which sounds fantastic!

- Posted on the move

Posted by Base Experience at 4:08 pm No comments:

I've been trying to get some arranging done on some tracks for jacquoda but there doesn't seem to be enough time. It's probably half "blank page disorder" an half masses of other stuff to do. But it got to get done; I need to get some kind of creative output going or I'm going to go insane (there's a grain of truth there, I'm actually having stress counselling at the moment!).

It's a rehearsal this afternoon as prep for a gig. Long one I reckon.

Posted by Base Experience at 10:03 am No comments:

I capitulated in Italy and bought an iPhone 3gs. It's excellent. I wish I'd been part of a company which had wanted to produce a device like this when I was working at Panasonic. They would have dismissed the ideas present on this device so quickly, the Japanese simply didn't want to listen to gaijin ideas.

Well now the gaijin have beaten them on the usability front!

Posted by Base Experience at 10:39 pm No comments:

High minded title, eh? I’ve been on a short break recently, and anyone who reads my facebook drivel will tell you I needed one.

I came to realise something while I was out there though. I’ve been far too stressed about both things I can’t control, and the lack of control I exert over the things I should. It’s affected my sleep, my work, my music and the way I view people. So, I’ve been conducting experiments on myself for the last couple of days to see if I can recognise and nuke the stress responses (usually by avoiding the stimulus).

In recent times, I seem to have become increasingly obsessed with researching, defining and quantifying how and why western society will ultimately tear itself to pieces, in a far messier and nastier way than communism did. While this was entertaining initially (it’s fun to trawl using google news) ultimately it’s self-fuelling and doesn’t achieve anything, except adding a little more to the stress fuel tank. Avoiding news media entirely is now my immediate goal – I’m not keeping track of MPs expenses (but mark me, if a sitting MP turns up on my doorstep I may spit in their face), I’m not following Obama-wan, I’m not concerned with Gordon Brown. Or I’m not trying to be.

Just the act of writing that first sentence in the last paragraph kicked in my new experimental “stress watchdog” reflex, which I’m trying to cultivate. Doubtless there are plenty of exercises in the Cognitive Behavioural Therapy arsenal which describe this in better terms, but I’m attempting to better realise the things which place me under stress, and actively take steps to stop my mind spinning off into the strange rants that have characterised my recent behaviour. Please bear with me during this transitional period, but do feel free to try out my new reflex with the odd good natured prod!

Those of you who are already naturally possessed of this talent will probably roll your eyes and think “get a life!” – that’s definitely the kind of mindset I’m after.

See, I’ve seen some old friends on facebook who are definitely going down a bad path to a place where I’m afraid only chemical solutions will bring them back up to “normality” (that’s a whole other debate – are we declared insane when we fall outside societal norms of defined sanity, and is this necessarily bad? Ah, Zen and the art of motorcycle maintenance). I’m not into posting a continuous stream negative stuff about how I feel for the public to consume: some things should be kept private – but definitely shared with actual people, face to face, so the human touch can actually take hold, instead of the horrible spectacle of watching someone trying to gain sympathy and self-confidence through the pity of others: that path can never work. I should say right now that I believe firmly that people have to reach a nadir, a low point, before rebuilding and recovery can take place. I sincerely hope that everybody I see feeling down or bad can reach this point and build the ramp back out of the hole.

I think I hit my stress limit in the last couple of weeks, and I’m actually feeling pretty good that I now recognise this and I can move on to take the steps to increase the proportion of my life which I feel in control of and enjoy, and strip out the meaningless stressful “prophet of doom” crap. I’m just not built for it, and it’ll kill me if I keep trying to persuade people we’re all shafted. I’ll have to keep a close eye on myself though: I recognise it’s because I care about things being “right” (morally, scientifically, personally, emotionally, etc) that I get so stressed, but I don’t think I’ve ever thought about what happens when your stress water-butt gets full J

I’d encourage anyone who is torturing themselves as I did (I don’t even know how many people are?) to do your best to let it slide, to forget about it… to get a life.

Hope that wasn’t too self-improvement-manual. Normal service will resume, promise.