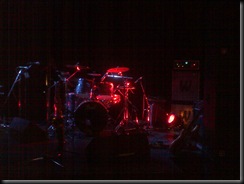 Metaphorically AND literally – last night’s gig was seriously hot. The gig last night at the South Street Arts Centre in Reading (nice venue, by the way – slightly out of the way but it’s a good space and they arrange tables at the front!) was a reminder of how hot things get on stage when they’ve got decent lighting going (and the lighting guy does good work – a mixture of blue and purple front and back gave some really nice contrasts on Armen’s kit, and the stage looked nicely “set” before the audience came in – I was impressed by that detail – check the pic!)

I arrived pretty much on time – 5:30pm, yet! – and Fatima Spar and the Freedom Fries were just finishing their soundcheck. Lovely guys, great double bass player who reminded me of Cooter from Dukes of Hazzard – lovely sound from his bass, despite having to use an old TNT 150 (I had one of those about 15 years ago!). They’ve got a great sound, it’s a real summery infectious experience.

Once the main act were happy with their sound, I did my usual routine of waiting for Armen to work out where his kit would go – he takes up the biggest amount of room onstage so it makes sense to see how the stage looks when he’s set up. To my delight, the Freedom Fries had no problems with moving pieces of kit away a little so we had good space to set up – far more space than any of the other places we’ve played in Reading – and I found a useful spot to place the Monster Stack, on top of the subwoofer for the PA.

My amp does hiss on the tube channel a bit (it’s the tubes, it’s what they do!), and the sound engineer noticed it – he dived in with a DI box (I didn’t mind!) but it was switching to channel 2 which really cured the problem I reckon. I also got a good reading from the engineer on balancing the synth sound for The Vibe with my live bass sound, which sounded great on the night.

A wide-angle view of the stage shows how much kit there was up there! Apologies for the focus, when I upgrade my phone (finally – the ones on offer are all shite at the moment) 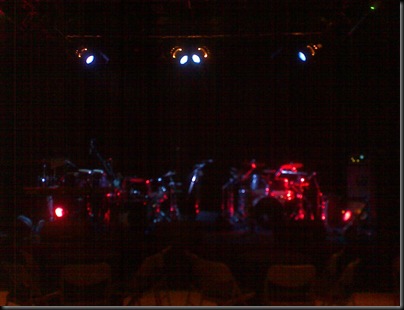 I was really pleased with the setup (you can see my W as a blue smudge on the far right!) – you can see Tom’s stuff on the left and Jacquoda got centre stage which is ideal – as it meant I could dismantle my stuff and get it offstage ASAP.

The gig went pretty well – I had spent all day doing mouse work at work, and my right hand was oddly stiff – took ages to loosen up – and that’s my excuse for the cack bass work on Turn me On. And I’m sticking with it :).

One thing though: as we’ve played a lot of small venues so far, we’re really not used to be spaced out across a stage: we needed better monitoring, but this isn’t easy in a short timespace (we only found out we were supporting 10 days ago!) – we’ve agreed that we need to rehearse in some bigger rooms, and some in-ear monitors for Jacquoda would definitely really help I suspect, she’ll be able to hear the whole band and we can tailor levels of different instruments so she gets the best mix.

Me? I don’t need no stinking monitors! I’ve got 900 watts of Warwick Neo POWER! And a very loud drummer.

Before the last track (turn me on), Jacquoda seized the initiative and did the band introduction bit, which was great – we launched into one of our patented jams, which funked up quite nicely, and when jacquoda ran through the names we got great rounds of applause and some cheers from the audience. Very gratifying. I was actually pretty pleased with the audience reaction, we reworked the set with a lot of the quieter numbers early on to “bring them up to Funkerton” – they had, after all, come to see Fatima Spar and her Freedom Fries, who aren’t quite as LOUD as we are when we get going…

All in all, a good evening with plenty of learning curves all round :)

Posted by Base Experience at 12:21 pm