The mystery of the dead 10" driver (Warwick Neo can, celestion driver)

Aha - I've been a little paranoid about the Neo magnets in my cab dying on me since I had a long hat with David Eden at the Bass show 2014 in London.

One of my drivers failed a couple of years ago, in a Neo Warwick 4x10 cab. I was lucky enough to bag a replacement celestion matched to the originals at pre-raise prices, which was cool.

Anyway, I wanted to see if I could use the magnet for something else, thinking the coil must have died, so I dug out the old speaker and (with some glee) ripped it open today. 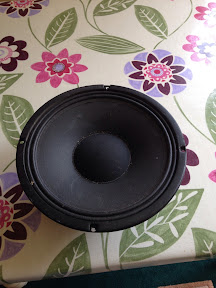 Here's the driver. Seems fine, but the cone travel is "crunchy". You can feel it. 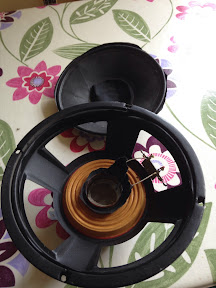 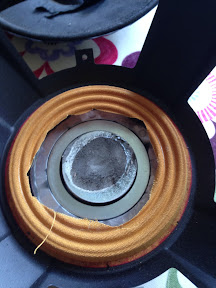 Bingo. The nickel plating was lost on the front of the magnet, allowing the elements to corrode it: hence the filings you can see on top, and the "crunchy feel" when gently pushing the cone in and out.

Keep at eye out for this if you've lost a driver, or it's failing: mine sounded buzzy for a while.

The good news is, according to posts I've read, Neo drivers don't fade if they've got good anti-corrosion in place and decent heat sinks. These drivers have good fins on the back: the other 3 are fine, and the new one is too.

Posted by Base Experience at 12:41 pm