Well now. Resurrection was always intended as a blog detailing how you can regain faith in musicians and making music with others. And the gig I've just got at the weekend is a great example of how it can happen.

You just have to put yourself out there, literally and figuratively.

These guys make some great classic blues - the vocalists (Liam Barnes and Heather Leoni) have the perfect voices for the job. And they both happen to be people who come down to the jam nights in Reading which I decided to start visiting last summer. What a year it's been since then - I play more music now than ever: I'm truly grateful to everybody who I've met and had the pleasure to create some noises with. A lot of great pictures are stored in the iCloud of my head!

So this Saturday, check out the beer festival in Caversham - it's a great event anyway, but Outlaw's music is beer festival gold, suitable! We're on around 7:45pm through to 8:45.

The only requirement is to be a hoopin' and a hollerin' like an ole boy. Stomp like you ain't got your shoes fixed!

Also, I get some Rhythm section time in with the excellent Rob McGregor again. Sweetness! 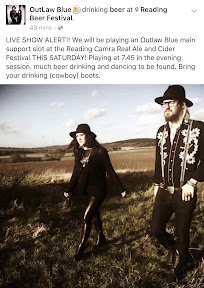 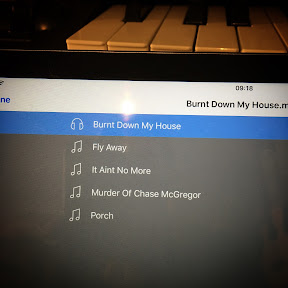 Posted by Base Experience at 10:43 am No comments:

I'm out here at Yates's bar in Reading (near the station) for the Jam night! 6 string to the fore #blog #music #jam #bass #Roland #gr55

via Instagram http://ift.tt/1SruA0r
Posted by Base Experience at 10:15 pm No comments:

I've had a good couple of weeks for long-standing jobs on basses which I've put off for a long time: First, I fixed up the Crafter BA-400 acoustic bass using new brass sting pegs and a new nut from Strings Unlimited - this bass is well built, but basically all the hardware on it was awful: I've replaced the tuners with Warwick ones (in the original silver, natch), and now I've replaced the string retaining pegs with brass "Pinz" (nice mother of pearl tops), and the nut: anything original which held the strings apart from the bridge (hope that holds) has decided to crap out.

Additionally my fretless has had a buzz at the 9th fret for a long time - I know fretless are meant to buzz, but this was an unpleasant out of character "rasp". I've spent maybe half an hour on the fretboard with 400 and 600 wet and dry paper, flattening out the dead spot, and it's worked! Just used the excellent fretboard oil I got from Rikkers and the ebony board has gone a beautiful shade of near-black.

Now all I have left to fix is the "bitsa" fretless I'm building with the rather pretty sunburst jazz body and my "Basexperience" neck - this has full on silver bridge and pickup covers, so when it's put together it'll look suitably retro. The body is fully loaded already and I haven't heard the pickups yet: it was an eBay bargain!

Good times at gigs and open mic nights recently: the Butler jam night last Tuesday was excellent - nearly 4 straight hours with 4 excellent drummers, great keyboards and some pure jam as well as some tracks we don't normally do.


Posted by Base Experience at 10:39 pm No comments: